Before going to Australia, I was kind of hoping to see couple of native animals such as kangaroos and koalas, but I was not prepared for what happened. In short we saw almost all animals that we saw in zoo also in nature. It is just an amazing experience, something you can rarely experience in Europe. The highlight of them all were probably whales. In total we saw them over 5 separate occasions (days) through our journey to the south, but the best experience was our first in Whitsundays.

While we were on the white beach skipper spotted something that looked like a whale in the distance. As soon as everyone was on board we chased after them. We were lucky to be in the area when we were (e.g. Australia), since the whales are only here around one month per year, when they migrate north to Arctic with their babies. They spend their time in the south to mate and to raise their children, which is great for us, since they are more active and do different stuff to teach their young ones.

It wasn’t long until we came close to the first group, we stopped about 300 m from them, they didn’t seem to mind us, as they continued to play for about an hour. After we continued our journey and on the way encountered two more groups before stopping in the afternoon for a snorkeling’s session. It was interesting going into the water, because if you dove about 2 m under the water you could hear some singing – a whale singing. I think I managed to record some.

Snorkelling was also great. The water was a bit clearer here and had more animals. Remember how happy I was that I saw a turtle last time? Well here I saw around 5 or 6.

After getting out of the water we prepared for our next snorkelling location but a couple of whales close to our boat caught our attention instead. Another mother and child playing about 200 m from our boat. I didn’t mention before, the specie of a whale was Hump whale, and adult one can weight about 30 tons and can be more than 10 m in length. It wasn’t long before we could see what that means for ourselfs. Without further ado, I give you probably the best action photo that I ever witnessed in real life, of course with my luck I missed my shot and only caught the splash afterwards, so here I present the photo taken by our skipper and a splash aftermath taken by me.

Even the splash that followed was amazing.

After this we did a couple more dives.

The last morning we had a chance to watch another sunrise early morning, before going for a last snorkel. I can’t believe how fast these 3 days went by, but it was one of my favourite experiences on this trip. Really worth doing it if you happen to be around Airlie beach.

After we got back we had another day left in Airlie to watch some cockatoos. I don’t know why but I find them so funny. You can normally hear them way before you see them and they have this smurky expression on their face all the time. I think I read somewhere that alongside parrots they are the most intelligent birds on Earth. We caught them stealing some food from a nest of another parrot and it was funny when parrot came back he chased them away, but as soon as he left they came back with this funny expression and raided his supplies… poor parrot.

Caught in the act.

On Wednesday evening we prepared for our departure, another thousand kilometres to the south! 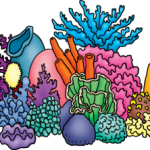 After really comfortable, Maggie got us seats at emergency doors so we had like 1.5m legs room in front of us, 3 hour flight, we have landed in Philippines, Kalibo to be exact.

Despite landing at around 11PM, the first thing we noticed after debarking was moisture and warmth in the air. After quick check-up we left the airport and could see the Philippines for the first time, and what a sight it was. Mind that it was dark, there were some locals in rugged clothes sitting in the middle of the street, grilling something on a fire (in the middle of the street), there were dogs, without a leash, everywhere, buildings looked half-finished and there was trash everywhere. Despite this cultural shock, there were already some people waiting for us, to get us to the Boracay island. After two hours of comfortable ride in a modern bus with AC, another check up in the port and a short ride with a boat, we were on the island. There was a van already waiting for us, to drive us to the hotel. I must say, they really take good care of tourists, everything I described here was included in price of around 10€, which we with the plane tickets. On our way to the hotel, I was really happy we chose a good, secure hotel, everything on the street looked like it was going to kill us, luckily as we found in the next days it wasn’t that bad, we were just tired and not used to it when we arrived, beside everything looks scarier in the dark.

The hotel was enormous and secure. It wasn’t a typical hotel, but more of a whole complex stretching around golf course. It was completely isolated from the rest of the island with fence and guards, especially the entrance looked like it was guarding post of a war camp. After quick check in at 2AM we were driven to our villa in the complex, to our surprise each villa also had their own guards and hotel personnel.

After a good night’s sleep, we head over to the main building, to have big buffet style breakfast. To our surprise the choice of food was enormous; from Asian, Philippines to the western food. They even had a cook who did your eggs as you wanted. After the breakfast we decided to go check out the hotel’s private beach (ofc it had one xD). Despite being only 10AM it was already really hot and impossible to walk barefoot on the asphalt (I tried). After short walk we arrived to the beach. It looked like a postcard, white sands, palms, light blue water… a paradise. We ran into the water, it was first time we were in the Pacific Ocean.

After a while we decided to go to the main beach of the island, so called white beach. The beach is enormous, it’s stretching along full length of the island, there is really fine, almost snow white, sand on it, palms in the back, beach chairs, quite a lot of tourists and locals.

It was not more than 2 minutes since we settled down, that we were swarmed over with locals trying to sell us everything from sunglasses to multi day tours around the islands. After what must have been 30minutes of bargaining and negotiations we reserved a diving tour for the next day. After locals saw that we actually “bought” something from them, they were all over us, coming in intervals of 2minutes, it got quite annoying really fast.

In the evening (that is 5PM there), we decided to walk along the beach, until we were hungry and ordered something to eat. The food was good and refreshing, and of course, we had to try (local) coconut milk with ice (it was delicious!). After dinner, we watched sunset, it was really beautiful and fast. The time since the sun first touched the water to the time when it was below, must have been no longer than 20 seconds.

Next day, early in the morning we were scheduled for diving trip. We met our guide on the beach where she got us our diving gear and brought us to our boat. Speaking of diving gear… there is a “funny” story associated with it, I’ll write about it in a future post. We visited three diving spots, full of fishes and corals, and in the end made full circle around the island. It was really nice and well worth time.

In the afternoon we went back to the beach, to relax some more and in the evening Veronika and I already had to prepare for the next day, when we had a flight booked to another island Cebu.

All in all Boracay island is very beautiful, there is tons of stuff to do there, now I’m sorry we were there for such a short time. Despite first impressions, people there are really friendly and really try to keep the tourists happy (much more than our neighbours khm khm!). Hopefully I’ll have a chance to visit Boracay and the rest of Philippines again.