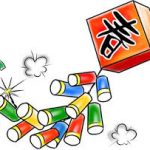 Friday was our last (full) day in Hong Kong. We woke up early (at around 9 AM :D), there was still thousands of things we wanted to see and do. When we arrived to the main island it was already around 11AM so we decided to go and try a Korean cuisine. We arrived to the restaurant just before lunch rush hour so we could actually get the seats without waiting.

Again in this restaurant we cooked our own food. I just love this concept, too bad we don’t have it in Slovenia! We were seated at the table with “hot stone” burner in the middle, got some vegetables to put on and then meat and seafood as we ate. The food was really really good (maybe because we made it? =) ). I especially liked the meats with good spices and side dishes.

After we ate we had another check box to tick from our TODO list; ride in a tram. While this looked interesting at first we soon regretted it. The tram was really narrow, almost half the width of a normal bus and as this is Hong Kong – full of people, we were packed in it as sardines. After short ride with the tram we transferred to a bus and drove about half an hour to the edge of the Hong Kong (country/region) to visit a nice sandy beach.

The beach was quite big, with yellow sand, it looked nice, though no-one was swimming. I’m not sure how clean the water is. There were also a lot of walking paths further down the coastline that ended at a small altar.

Soon after we returned back to the city, we had one big thing left to do. And when I say big I mean high. We wanted to go to a restaurant at the top of the tallest building in Hong Kong – 480m high with a restaurant in the highest – 118th floor. The restaurant at the top was really fancy and we stood out but the view was worth it. We were so high up you could barely see cars below yet alone people. And the buildings that looked super high before (30+ floors) looked like normal houses from up there.

The building also has an observatory on 100th floor, but it’s not worth visiting. You have to pay around 15€ for a ticket to go there, or you can just go to a restaurant in 118th floor, buy a drink for 15€ and have an even better view.

At 7PM we descended the tower and went to a restaurant, where we met with Jean and Leff. The restaurant was really full of people and it was an interesting design. It was more like a market (indoor) surrounded by different “food stands”, but the waiters brought food to your table. The food was again more traditional Hong Kong’s food.

This was our last night in Hong Kong. Later that night we returned back to our island to prepare for departure on Saturday evening, but before we left Hong Kong we had one last thing to do. Again all of us met; Veronika, Jean, Maggie, Leff, Allen and I, for one last meal. We went with traditional Hong Kong theme again, with lots of steamed dumplings which are so good.

After the lunch the rain started to pour – the first time while we were visiting. We said goodbye to Leff and Allend and went to the airport, where we said or goodbyes too Jean and Maggie who were traveling to Korea.

But before we left we just had to have another scare. Our flight was delayed for about 2 hours, so we only had 30mins left for layover in Beijing. There were actually people waiting for us in the airport in Beijing and took us pass the security too speed up the boarding.

Hong Kong from above

We landed in Hong Kong at around 9AM and it took us another 2 hours to find our way back to Jean and Maggie’s island. After a quick bite to eat, we decided to go to the main island to take a look at the iconic market stalls on the streets. This was more what I expected Hong Kong will be like, full of people on the streets with stalls where you can cheaply buy almost anything.

We bought some souvenirs and decided to go to the museum nearby, about history of Hong Kong. It was really interesting to learn about history of Hong Kong area, spanning from thousands of years ago till the Second World War. The museum was large, with tons of exhibits, we spent in it more than 4 hours, while looking at everything carefully at the beginning and almost running through the later exhibits.

After the museum we decided to go taste Japanese cuisine in a sushi restaurant in Mang Kok – the most crowded area of Hong Kong, but more about this later. So sushi … we sat around a long conveyer belt which was loaded with numerous dishes ranging from 7 – 40€ per plate (that is 1 or 2 bites per plate). After trying some dishes that we (me and Veronika) didn’t like, among them sea urchin, and spending a fortune on them, we decided we should go somewhere else to have a dessert. At that point Maggie joined us and found us a great little desert place nearby where we had some really good cakes.

After we slowly returned to the island, we had to prepare for the next day, when we would go to the highest hill above Hong Kong – The peak.

Sunday morning (it was more toward noon actually) we departed toward main island from where we would start our ascend. But first we decided to have a traditional Hong Kong lunch in a restaurant nearby. Food was surprisingly good with our favourite dish (of the whole trip) being traditional steamed dumplings with sweet filling.

After big lunch we started our ascend. Because area is so crowded the buildings go as far as possible up the steep terrain, because of this it seems like they are build leaning at the hills behind them. At one point we actually took an elevator in a building and could exit at the top and just continue further up the hill. On our way we also went through a university, again spanning multiple storeys with lots of parks, atriums and open areas inside. Soon after we finally reached the end of high urban area and continued on a wide pathway toward the top.

The path was really steep so we were quickly gaining height and despite lush tropical vegetation around us shading the sun it was the hottest I ever felt. The sweat just poured from us, after few minutes we were as wet as we would be swimming. I think it was around 37 degrees C with what felt like 95% relative humidity.

On the top there were again one million people, big building providing nice vantage point over the city, shops, restaurant, tram that you can take to drive you up/down the hill – with 2h wait line of course.

For our descend we choose more direct path near the tram line and through some of the richest area of Hong Kong. While walking down we went past houses and apartments that cost few million $ per year just to rent but strangely don’t look that expensive. What is expensive is the location. On the road though, we saw a lot of Ferraris, Porches, Lamborghinis and other expensive cars. After about half an hour we left the tropical jungle for the concrete jungle.

Even after a week in Hong Kong I still couldn’t get used to these extremely high (and narrow in my opinion) buildings.